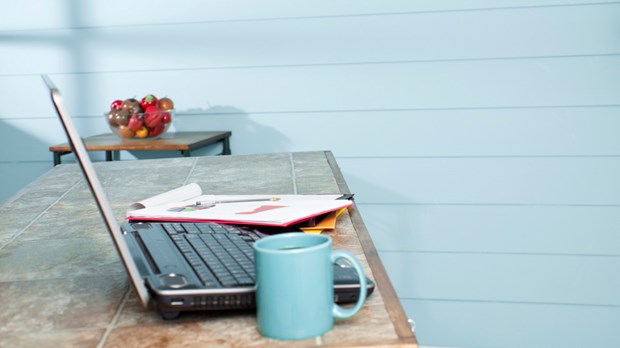 "What business are you in?"

It was an innocent question from James, the kind, starched-shirt banker who was helping me close out my business checking account last week.

I know what I do now. I write. I edit. I speak. Suddenly, though, I couldn't remember what wares I'd been hawking when I opened the bank account 10 years ago.

"Ummm . . ." I stalled, "That's a good question. I'm a writer now, but when I opened the account, I was probably selling something."

Because so many of my work-at-home businesses had failed, it was suddenly hard to remember how I'd begun.

Was it custom magnets for wheelchair-accessible vans? Personal puppets that matched their owners, like American Girl dolls? Jingle bell necklaces? Wonder Woman figurines strung as weird, bulky necklaces? Hand-painted toilet plungers? Because so many of my work-at-home businesses had failed, it was suddenly hard to remember how I'd begun.

I continued to babble, "I'm a stinky business person. I really shouldn't be allowed to sell stuff."

It was the first useful thing I'd said to James.

Now, as I mentally scanned the two-decade-long entrepreneurial train wreck, I realized that I actually had learned something about being a work-at-home woman.

My first business—featuring a stick-figure logo that looked a lot like me grinning and waving "jazz hands"—was Starstruck Creative Clothing. In 1991, I cleaned out every San Diego thrift store of denim jeans, jackets, and overalls, then dyed these garments rich shades of purples, pinks, greens, and oranges. I then embellished them by stitching psychedelic fabric from groovy 1970s dresses onto them. I'm not going to lie: These one-of-a-kind creations were delicious.

When I let my imagination run wild (which I was apt to do), I imagined a fashion editor spotting me at the beach wearing one of my signature garments and begging to know where I'd gotten it. I'd explain that I'd handcrafted the custom piece and then I'd reluctantly agree to be featured on the pages of Vogue. I knew my circus-like designs were unlike anything that they were already featuring in Vogue, but that's what made Starstruck Creative Clothing so revolutionary. (In my mind.)

While I certainly hoped one day to hire Santa's elves during the off-season, as I launched my business, I was producing these masterpieces on my own. This meant that my two hands did everything, from pawing through other people's stained, used clothing to tying a bow on the cutie jazz-hands price tags I'd made at Kinko's.

By the time carpal tunnel began to set in, I realized that once I'd driven from store to store, spent hours shopping, purchased my supplies, bleached the denim, dyed the denim, and meticulously hand-stitched the decorative fabric, I could either make 12 cents an hour or charge $750 per item.

I learned my first lesson the hard way: My time was worth money.

I learned my first lesson the hard way: My time was worth money.

The birthday gift I gave myself for my 38th birthday was to spend one week making games. I sent my wee ones to day camp and took the week off of my regular low-paying day job—pitching and writing magazine articles between preschool pickups—to try my hand as a game maker. I was pretty sure I was going to be a genius at it.

I knew that there was no market for boxed board games, like the classic Sorry or Monopoly, so I spent the week creating games for magazines. There was, after all, an actual publication called Games and someone had to whip those up, right? Why not me?

After submitting about a dozen games to various magazines, I returned to my writing work and waited for the contracts—and possibly requests for movie rights to my life story as the gaming genius of the 21st century— to roll in.

About a month later, I received word that one of my games had made it through the first gauntlet at Highlights Magazine for Children. It would, I learned, be offered to a roomful of test-kids. If they liked it—if they didn't crumple my game up into a ball and throw it in a trash can—it would be published. If they didn't like it, my game would get the ax.

Great news: The child laborers liked it! Not only was my game—a maze helping a hot, sweaty basketball player get to a cool glass of lemonade—published in Highlights, but years later I would open up a Delta in-flight magazine, with Jimmy Kimmel on the cover, to find the game I'd scrawled into being at my kitchen table. Designer? One Margot Starbuck. #ProbablyEnjoyedByJimmyKimmel

While flattering, it was also the moment I realized I had apparently signed away my rights when they sent me that first contract for . . . 50 dollars. So while this one small success certainly was more than enough to convince me I actually am a genius game maker, there is simply not a big enough market to justify investing another week of my life believing I might forge a career as Maker o' Games.

In the populous world of failed business ventures, we reluctantly learn to call these exactly what our significant others call them: hobbies. So my second lesson? An abundant supply of the greatest product still won't trump "no demand."

So my second lesson? An abundant supply of the greatest product still won't trump 'no demand.'

The venture into which I poured the most money over the years was Breadbox Greeting Cards. (Tagline: "Visually Delicious, Spiritually Nutritious" in case you were wondering.) I created more than 100 different designs that I stocked, sometimes by the thousands, under every bed in my home (and some neighbors' homes).

The most favorable responses I received, from my three customers, were to the designs I'd created that featured shoes. The brown Doc Marten boot, the blue Birkenstock sandal, the purple running shoe, and the lime-green pump—each featuring a verse of Scripture with a "walking" reference—were a huge hit. With the three customers.

In my mind (where so many of my business successes existed), this "Walk with the Lord" series was going to be as big as "Life is Good." Maybe bigger. In addition to cards, I even started printing a signature lime-green pump, with white polka dots, on cutie T-shirts and hats.

Here's the rub: It turns out that to make money selling products, you actually have to sell the products. (A rude awakening.) I gradually came to realize that this was the problem of so many of my creative ventures. I would be manically happy dreaming up a product, choosing a clever name, developing a tagline, creating a logo, garnering a domain name, and posting my products online.

Sales, however, were the singular sticking point keeping me from success. Had there been some Christian version of Shark Tank, I still think I could have made millions. In the absence of said show, my beautiful designs were relegated to fire-hazard status under beds and in attics.

Today, when I see creative souls like myself sinking good money into inventory that may or may not ever sell, I reach out and slap them. Then I tell them my sad story.

My third hard-learned business lesson? Ensure that there's an effective way for your products or services to reach consumers.

The result of hard-learned lessons

"Ahhh . . ." you may be thinking to yourself. "It's now crystal clear why James the Banker was closing out your business checking account, Margot. You have no business working at home! Please, just go out and get a job in one of the usual places: McDonald's, Walmart, Costco, Sears, and many others."

Believe me, I've had this thought many times over the years. If the van magnets and puppets and necklaces and key chains and plungers didn't make it clear: I don't give up easily. Painful lesson by painful lesson— sometimes "learned" repeatedly, in consecutive ventures—I found what worked for me.

Painful lesson by painful lesson—sometimes 'learned' repeatedly, in consecutive ventures—I found what worked for me.

Today, I work at home as a writer and editor. I travel once or twice a month in my work as a speaker. In a most unlikely turn of events, I'm successfully working from home. As an editor, rather than pouring out my time for free and hoping for the best, I am hired and paid for my time and expertise. As a writer, I complete contracted projects for which there is actually a need. As a speaker, the way my "product" reaches customers is typically via airplane, while snacking on peanuts and sipping Diet Cokes. The win is that I produce the custom product—a keynote address, a weekend retreat—after a real customer has placed an actual order.

Today, when friends of mine are toying with the idea of working from home, I am both the realist waving caution flags and also the cheerleader wiggling her pompoms and shouting "You can do it!"

You can. (With caution.)

If you work from home, what is one thing other women who might be considering it need to know? Please leave us a note in the comments below!