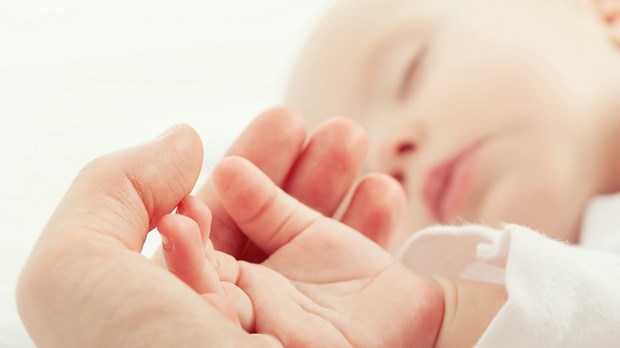 A few weeks ago I was puzzling aloud about a parenting conundrum, when my 14-year-old chimed in: "Why don't you ask that lady without hands?"

She meant my new friend, Sarah Kovac. She'd heard me raving about some of Sarah's parenting strategies.

"Well," I explained, "she has hands. They just don't work well."

I had a hunch, though, my daughter was probably right.

AMC (more than a movie theater)

Born with Arthogryposis Multiplex Congenita (AMC), a condition causing joints to be stiff and crooked at birth, 30-year-old Sarah has necessarily had to find creative strategies to parent her two children, Ethan, who is 4, and Taylor, who is 5 months. AMC can affect any of the body's joints—including the jaw and spine, as well as extremities—and very rarely are two people affected exactly the same way. In Sarah's case, her arms and hands have very limited use.

She does pretty amazing things with her feet, though. In fact, seeing videos online of Sarah driving and diapering with her feet is what made me want to know this amazing—and normal—mama.

After all, hauling kids to and from Walmart in the minivan, getting them buckled in and unbuckled out, is unwieldy enough for any parent. Yet Sarah does it with her feet.

After all, hauling kids to and from Walmart in the minivan, getting them buckled in and unbuckled out, is unwieldy enough for any parent. Yet Sarah does it with her feet.

"When I am driving, I try to not make it so obvious," Sarah explains, "because I feel like it might be a distraction to somebody else. If I am at a stoplight, I will put my foot down so it is not as noticeable."

When a stranger sees Sarah caring for one of her kids out in public, as only she can, they sometimes try to jump in and help. From what I've gleaned of her kind disposition, I suspect that Sarah most likely responds very politely. So I ask whether she feels comfortable letting these potential "helpers" know it's not cool.

"Usually I just say something like, 'It's okay, I've got it,'" Sarah explains. "But usually they will push and keep asking."

Given some of the situations in which Sarah finds herself, it's hard to know which is worse: the asking or the not-asking. For example, Sarah buckles her babies into their car seats—in that back third row of minivan seats—by sitting on a seat in the middle row that's been folded down. One day, a fellow in the church parking lot felt free to poke his head into the van and watch what really wasn't meant to be a show.

"Because I do things differently, people sort of feel like it's an invitation to get involved or to observe things that they usually wouldn't get involved in or observe if it were somebody else," Sarah says. "In those moments, I have to take a deep breath and remember that this isn't something they have seen before and try to be patient."

Sarah had described to me the chaotic scene at one of those children's indoor play areas—the kind where kids dangerously climb up the outside of climbing structures and jump off things safety engineers never meant them to jump off of. Marveling at what it would take to keep a child alive in one of those deathtraps without the use of arms, I'd explained to my daughter, Zoe, that Sarah couldn't just snatch her son off of a too-steep slide or too-tall ladder the way another parent might.

For more information about Sarah Kovac, visit her website at SarahKovac.com, or read her book In Capable Arms.

"Since she can't use her arms," I narrated, "she has to be super-strategic in the way she uses her voice."

This is what had signaled Zoe that Sarah could probably school me in parenting my own children, who are a decade older than Sarah's little ones. And I suddenly did want the opportunity to watch Sarah in action, to learn from her. So I wondered who Sarah eyeballed to learn how to parent with a different set of resources.

"Until Ethan was born, I didn't know any other parents with AMC who I actually interacted with. And even among those I talk to, I think I am the one who has the oldest kids."

Sarah has learned to parent, as we all do, on the fly.

Nursing (and other challenges)

Baby Taylor is now five months old. Because Taylor refuses a bottle, she travels everywhere with Sarah in order to breastfeed.

Nursing discretely in public can be unwieldy enough with two hands, one wiggly baby, and some sort of cloth to afford a measure of privacy.

Sarah agrees, "It is hard for me to be really discrete about it. That is the only challenge. Really, that is more of a mental thing. I am not going to get arrested for trying to nurse if I accidentally flash a nipple."

She continues, "I usually try to angle myself in such a way that I'm sort of facing a corner. But just the thought that somebody might think that I am trying to be indecent is hard. It is easier to stay home at that point."

Sarah is transparent about the fact that her greatest challenges are mental and emotional ones, not physical ones. For example, at the indoor play area, four-year-old Ethan was running after two older boys who were purposefully leaving him behind. That, Sarah says, is harder than the physical.

Sarah is transparent about the fact that her greatest challenges are mental and emotional ones, not physical ones.

As Sarah watched the chase, old feelings of rejection welled up inside. "I actually experienced that exact same scenario as a child more than once. And it was so difficult for me to watch and not step in and do something. I just had to run off to the bathroom to go cry and then come back."

So if it's not clear, Sarah's challenges are the ones all moms face.

When I asked Sarah if she had wisdom to offer other moms that she's gleaned from the challenges she's faced, I thought she might hesitate.

Her voice, though, grew stronger: "I think one of the big things that I have learned is that we don't give kids enough credit for being adaptable to a situation and being able to learn."

When Ethan was an infant, other adults would make a game of letting Ethan arch quickly backwards, then catching him at the last moment. Knowing there was no way she could catch him if he tried it with her, Sarah felt angry and concerned. She notes, however, "He never once did that with me."

Though Sarah's husband, Adam, usually bathed Ethan as a baby, one day Sarah needed to give the bath. The hard part, of course, was getting Ethan out of the tub. He was not even one year old. At the end of the bath, Ethan stood up and locked his arms down to the sides so that Sarah could hook her hands under his armpits. He'd never done it before and no one had taught him to do it. He'd naturally adapted to Sarah's abilities.

"We feel like our shortcomings and failures are the end of the world for our kids," Sarah says, "when in reality, they are what prepare our kids to be in a world that is not perfect. To have a perfect parent would be devastating for them, actually, because they would get out into life and they wouldn't know what to do."

My daughter was right.

The lady "without hands" has a lot to teach me.