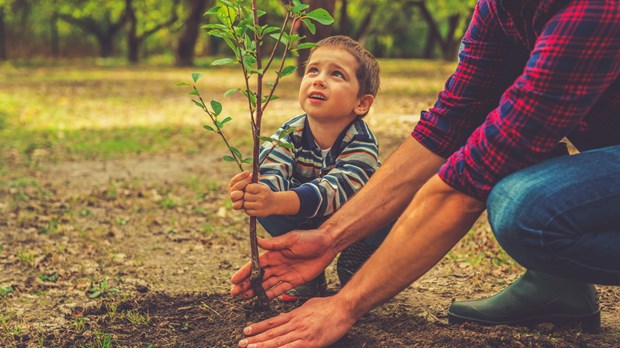 When our son was little, he and mom had a very close, happy relationship. Mike was a sweet boy who had no problem giving mom hugs and asking her lots of questions. He was her little boy. But then Mike moved into the early stages of puberty and the relationship changed . . . dramatically. With tears in her eyes, Jan asked me why her son hated her.

What Jan didn't know at the time was that Mike was at a crucial point in his life—the point where he had to start moving into manhood. And the movement into manhood meant he had to begin to pull away from his mom.

Most moms I know aren't prepared for that moment. They don't understand it. As their boys start moving into manhood, many moms often feel lost.

It's Tough to Be a Boy

On top of that, add in the challenges boys face today in the 21st century:

In light of the challenges boys face today along with a mother's own sense of loss as she tries to understand her son, how can moms (and dads) call their boys into manhood?

Here's a good place to start: Partner with a local congregation and equip your son to follow Jesus into heroic manhood. Find a church (or challenge your congregation to become a church) that shares the same passion you have for raising boys into men. Then work together to call your son into honorable adulthood. As cultures throughout history have always known, it takes a tribe to raise a boy into a man. That means that your son will need men—dad, grandpa, coaches, and men from the church—to help him become a man.

While involving men in mentoring your son is critical, you also have a crucial role to play as your boy becomes a man. As your son's mom, you have three vital and compelling tasks:

Pour your love into your son. Though there will be times when your son seems to resist your love, he will never stop needing or craving it. How you demonstrate that love will change as your son ages, but keep reaching out to him, keep taking an interest in his life, keep praying for him, and keep hugging him (as much as he will allow). Remember, when men mug in front of a camera, 99 percent of the time they say, "Hi, mom!" A boy never outgrows his need for mom's love.

Teach him about women. You will be a primary teacher for your son on how to relate to girls. Teach him to be the man you want him to be for you, for his potential future wife, for his potential future daughters, and for all of the women he will interact with during his life. Give him insights into a woman's world so that he can navigate his way through it with honor and goodness. It takes a mom to instill in her son a deep understanding of women.

When he acts less than honorably, use it as a teaching moment and call out the nobility that's within him.

Ensure that your son has access to the "tools" necessary to become a man. While it takes a man to make a man, you can take the lead—with or without dad—by partnering with your church to help your boy grow up into heroic manhood. Choose to embrace the following six choices you and your church can make.

6 Critical Choices You Can Make

1. Immerse your son in masculine energy. Men are built by men. To become men, boys need masculine energy poured into them. They need positive male role models to follow. The key to building heroic boys is to surround them with great men—their own dad (if possible) as well as other men—who can model responsibility, love, compassion, fatherhood, and manhood to these young men-in-the-making. This is where the church comes in. The church is full of men waiting to be called into greatness—a greatness that can be expressed by pouring themselves into boys. This choice is especially crucial for boys being raised by single moms.

2. Cast a heroic vision for manhood. Paint a picture of manhood for your son built on honor, courage, commitment, sacrifice, love, compassion, forgiveness, wisdom, and grace. When you see your son acting heroically, affirm him. When he acts less than honorably, use it as a teaching moment and call out the nobility that's within him.

3. Give your son purpose. As you see his emerging gifts and talents, affirm him in them. Once in a while look him in the eye and tell him you know that God has created him for something very special. Your church can help in shaping your son's purpose as well by providing a place for boys to discover their God-given gifts and talents and root their purpose in following Jesus.

4. Let your boy become a man. At some point, around puberty, your son will need to distance himself from you (as my wife experienced with our son). He needs to leave behind all of the feminine energy that has been shaping his life and enter into the world of men. This is going to be extremely hard on you. You will wonder at times what happened to your gentle, loving little boy. You will wonder at other times why your son hates you. There will be lots of tears and doubt. But this is an absolutely crucial time in the life of your son. Let him go . . . but let him go into the hands of men of faith in your local church. Use the church as a support group for you as you walk through this important time of transition for you and your son.

5. Provide the "father blessing" for your son. Every son needs the blessing and affirmation of his father. The father blessing sets a boy on a positive path in life. The lack of a blessing can leave a deep, life-long wound. Even Jesus needed the blessing of his heavenly Father to carry out his mission and ultimately face the Cross. That's not to say, Mom, that your blessing is not important. It is crucial in building your son into a heroic man! But the need for a son to hear his dad's blessing is primal and deep. Most men I interview have never received that blessing. Encourage your son's father to bless your son—to say to him often, "I love you. I'm proud of you." But if your son's dad is not around, you can intentionally partner with your church family and find some good men to bless your son. At our church I regularly create opportunities for dads to bless their sons and for men to bless boys who don't have a dad.

6. Connect your son to his heavenly Father. Through worship, prayer time as a family, involvement in Sunday school and youth programs, boys have a chance to experience the power, grace, and love of their heavenly Father. Ultimately God is the one who calls them to follow Jesus into heroic manhood.

These are tough days to be a boy. And moms, these can be tough days to raise a boy! But as moms—and as dads and congregations—we can partner together to call and equip our sons to follow Jesus into heroic manhood.

An earlier version of this article appeared on Huffington Post. Tim Wright is the pastor of Community of Grace in Peoria, AZ. He is the author of the new book, Searching For Tom Sawyer: How Parents and Congregations Can Stop the Exodus of Boys from Church (WestBow Press). Connect with him at http://www.TimWrightMinistries.org.