What to consider when deciding on your child's schooling
Maria Cowell 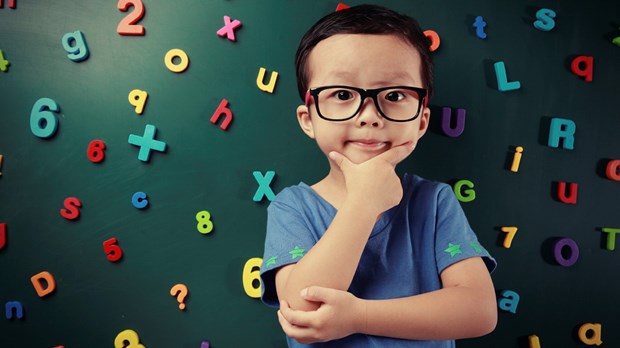 It wasn't too long ago when sending your child to kindergarten simply meant packing his favorite sandwich in a shiny new lunchbox and dropping him off at the neighborhood school. Or if money wasn't an issue, enrolling him in the local parochial school. Educational options were simple and straightforward.

For some, that might still be the case, but today many parents face a complex educational landscape. Issues such as academic quality, curriculum focus, bullying and sexual harassment, competitiveness and overachievement, and even politics are increasingly affecting parents' educational decisions.

Angelina Arrington is an educational consultant and founder of Academic Savvy in Los Angeles, which provides services for K–12 families. Before consulting, Arrington worked more than 20 years as an administrator and teacher in both public and private schools. She has learned that a variety of factors impact educational choices.

Parents are scrambling for alternative choices—magnet, charter, private, or homeschooling.

"College is becoming so much more competitive, and that has created a trickle-down effect for K–12. Secondly, there have been so many legislative budget cuts resulting in larger class sizes and fewer resources at schools. Parents are scrambling for alternative choices—magnet, charter, private, or homeschooling. Safety has also come to the national forefront: we are seeing some of the safest schools experience great tragedies," she says.

To help untangle the complexities, Arrington advises parents to look broadly at three areas as
they make their choices: academic quality, family values, and finances. While each of these areas is distinct, they also overlap and blend when parents are deciding between public, private, or homeschooling.

By far, the majority of American families enroll their children in public school. According to the National Center for Educational Statistics (NCES), the primary federal entity charged with collecting and analyzing educational data, 50.1 million students attended public schools while 5.2 million students (roughly 10 percent of all school-age children) attended private schools in 2013. The NCES also reports that homeschoolers make up 3 percent of schoolage children.

The NCES administers a National Assessment Report each year: the 2013 report shows private schools outperforming public schools by ranges of 10 to 25 percent in math, reading, writing, science, geography, and civics. However, parents should keep in mind that public schools often have more advanced placement and honors classes as well as extra-curricular activities that aren't dependent on tuition dollars. And many public schools do offer solid programs, or even specialized programs (such as a medical magnet or performing arts
school) that private schools can't.

If you live in a good district, then chances are you will find a good school. "A lot of it depends on location. If you live in certain parts of your county, it may be more advantageous for you to go to your local school, one that is highly-rated," says Arrington. But if you don't, and moving is not an option, then there are proactive steps parents can take to make the public school experience positive.

Tanya and Ryan Blanck's two daughters, Emma and Morgan, both attend public school in Southern California, which, deserved or not, has a negative reputation. "I was nervous to try public school," she says. The Blancks were frustrated with the first school they tried—they felt they weren't listened to and worried Emma's progress would be impeded, so they pulled her out and put her in a different school.

'Never be afraid to reevaluate your decision or feel you are stuck in one school.'

"You have to take each school individually," says Tanya. "Never be afraid to reevaluate your decision or feel you are stuck in one school." After the switch, she was blown away that a public school would be so willing to accommodate Emma's accelerated pace.

One of the first things Tanya did was learn about the culture of the school by talking with other parents and setting up a meeting with the principal to see if administrators welcomed parent input. She also started volunteering.

"Once you see how the teacher interacts with the kids you get a better idea of what is really going on," she shares. "I got to know the teacher, and if I had an issue it helped that we already had a relationship."

Studies have reported homeschoolers outperforming both public and private school students, with some reports citing homeschoolers one to four years academically ahead of their peers. But families considering homeschooling need to keep some things in mind, such as ability to teach subjects beyond the scope of the home educator and/or providing a broader curriculum.

"We have seen changes in the perception of homeschool over the years. It is much more accepted now as mainstream and not just the domain of faith-based families. Many families choose it for academic reasons. We have seen so much success with homeschool students, for example, winning the national spelling bee and geography bee, and increasing numbers of homeschoolers accepted by prestigious colleges," she says.

Parents who feel they are in over their heads when it comes to advanced subjects can join co-ops where a parent skilled in calculus can teach that subject while a different parent with technical ability can teach computers. Parents can also choose to attend curriculum conferences or supplement classes with local schools willing to work with homeschool families.

Because her husband is in the coast guard and they have moved five times, homeschooling their three kids was the most practical option for Bobbie Kennedy. Her youngest, Jack, is in now in seventh grade and has benefitted from a homeschool co-op that provided a writing experience Bobbie could not.

"This past year Jack joined the co-op's newspaper club and learned how to write and prepare news with his homeschool group," she says. She has also utilized the co-op for math and science courses.

As with public or private school the quality of the education depends largely on the commitment and dedication of the teacher. In most homeschool families, the teacher is the mother, balancing teaching with domestic duties.

"You have to realize it is a life change. You aren't getting up in the morning and putting your child on the school bus. It is totally you with your kids 24/7/365, and you need to be prepared to make that decision if you believe it is in the best interest of your child," says Tricia Bright, mother of two.

While academic quality is certainly a consideration for many families, values also play a significant role in the educational decision. "You have to know your family's values and find
the best educational match," Arrington advises.

Many families choose private school because the values more closely match their own, but Christian parents need to realize that even in private schools there can be disparities. Not all faith-based schools require students to profess faith; some are theologically liberal or conservative, and issues like bullying, disrespect, and cheating take place everywhere.

"The school can help build on your faith values, further supporting what you have already established, but it is still 100 percent on the parent to be responsible for instilling those values," says Cheryl Pubols, whose daughter attends a non-denominational Christian high
school in Southern California.

Christians who use public schools, be it by necessity or choice, are uniquely challenged in the values area and need to prepare themselves and their children for possible conflicts and "teachable moments."

For Carrie and John Ustica, parents of six, private school was financially out of reach and so was homeschooling since they both work. Carrie felt, though, that their public school would be just fine because they lived in a conservative, Bible-belt community.

"I've had some eye-popping moments. One was explaining to my first-grader why one student had two mommies. The other was that my daughter Christine used to take her Bible to school in kindergarten, but one day the teacher said she couldn't. I asked the teacher if Christine was reading it during class, and she said she wasn't. She was reading it at lunch on the playground, but my daughter was adamant that her teacher couldn't be wrong. It was a teaching moment for us to tell her sometimes teachers say things that are not true."

The Usticas experience has been a mixed bag of good and bad, but in the end Carrie advises Christians not to be fearful, but prepared.

"Yes, there is a whole lot of yuk that goes on in terms of worldviews. We don't want to shield our kids from that, but we also realize more and more how much we need to instill in them a foundation to be a light in the midst of that and how to engage with the culture."

For one, most private schools have a 'tuition gap,' which is the difference between what it actually costs to educate the child versus what the parents pay.

Clearly, private school tuition takes a chunk out of family finances: the Council for American Private Education reports the national average cost at $10,045 per year, but even families that can afford it need to consider a few things. For one, most private schools have a "tuition gap," which is the difference between what it actually costs to educate the child versus what the parents pay. Subsequently, private schools are dependent on fundraising to fill the gap and parents can quickly tire of the cookie dough or giftwrap sales every year or requests to donate to the annual fund. Private schools may have other costs such as textbooks, uniforms, and fees to participate in sports, drama, or music groups. Some schools also require volunteer hours as a way to cut costs.

"A decision to attend private school is going to impact the family financially, so it needs to be looked at in its totality," says Arrington.

Even homeschool families that choose that option due to values or academics need to realize there are costs such as purchasing curriculum, homeschool association fees, attending conferences, or paying admission fees for field trips sites. Beyond those costs, there is also the consideration of loss of income if one parent stays home to be the primary educator.

Tricia was a pre-school special needs teacher for 16 years before she stayed home to teach her two sons.

"The biggest challenge was adapting to one income. We had been a two-salary family and that's what we had always planned on. I was in my 16th year of teaching and was the higher wage earner," she shares.

As a result they didn't get to take the types of vacations they had envisioned or take their kids to all the places their friends went. However, she adds, all that has been worth it as she sees her boys secure and thriving.

. . . education is fluid and no decision is ever final—you can always pick a new route.

With all these factors at play and many possible tradeoffs and benefits for each
option, it can be daunting to try to make the very best call for your family. However, you can rest assured that, as many of these stories show, education is fluid and no decision is ever final—you can always pick a new route. Whatever you do, if you are consistently putting your children's best interests first, you can't go wrong.

Maria Cowell is a writer living in Los Angeles. Follow her on Twitter at @HipMamaMedia or HipMamaMedia.com. 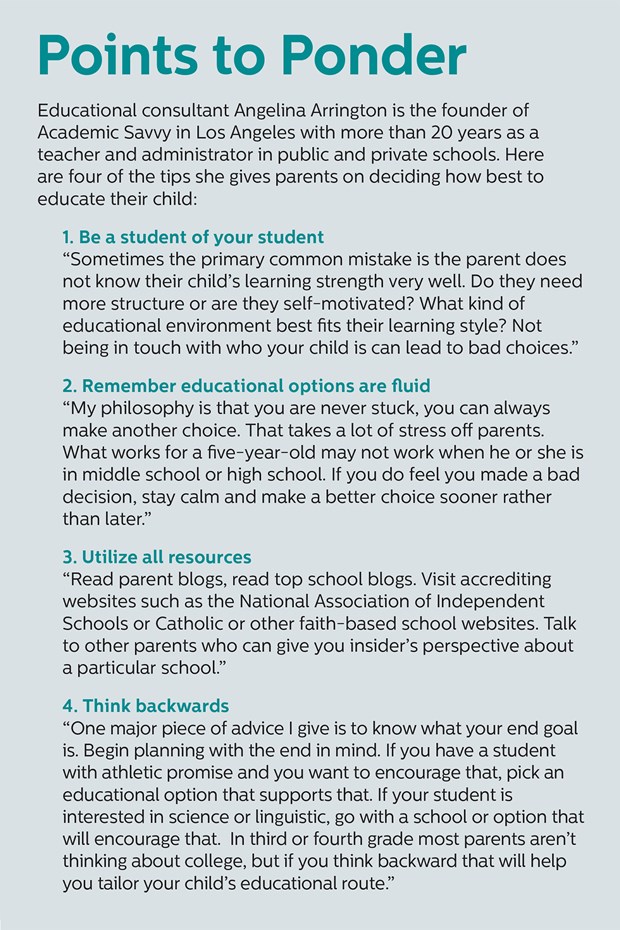 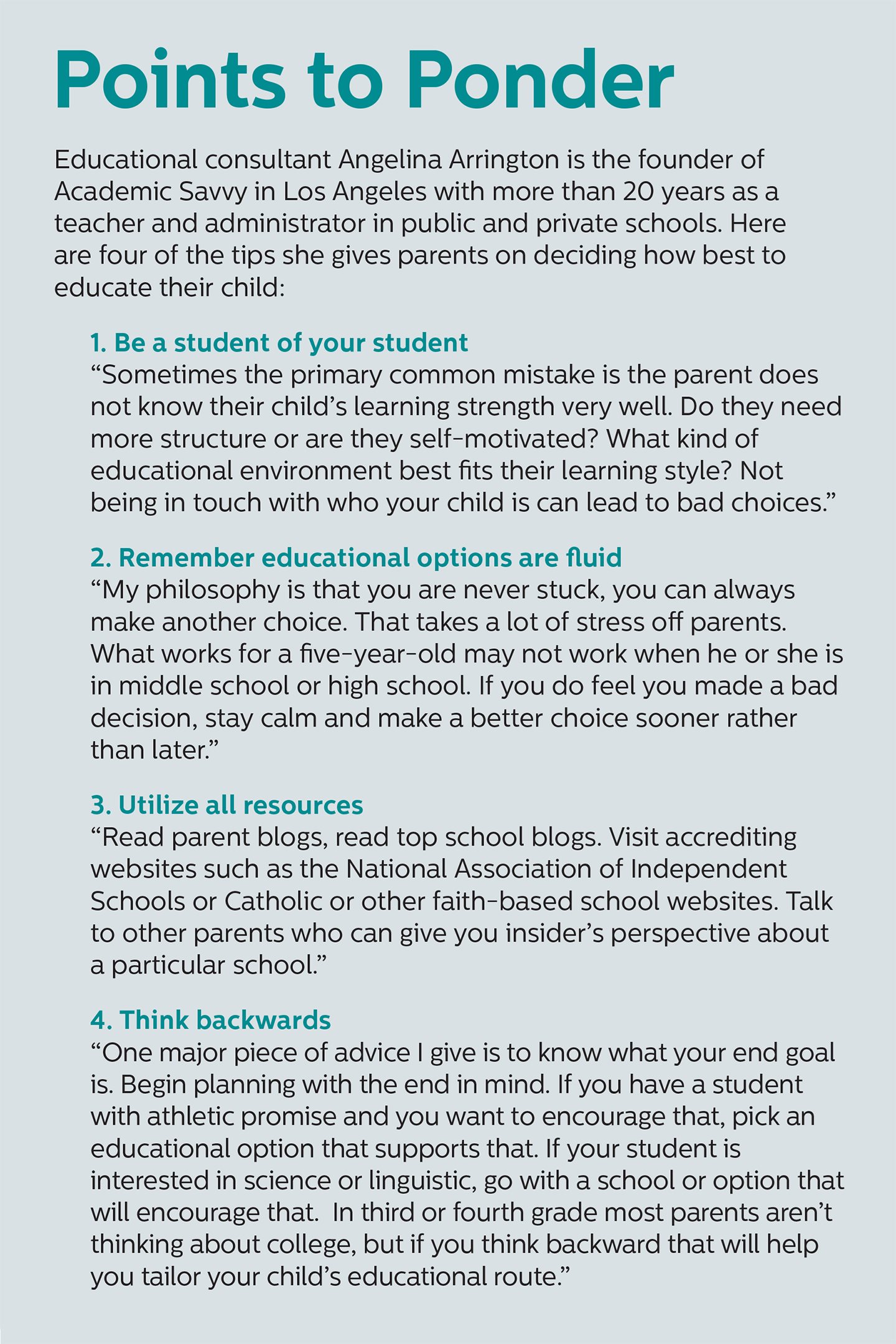